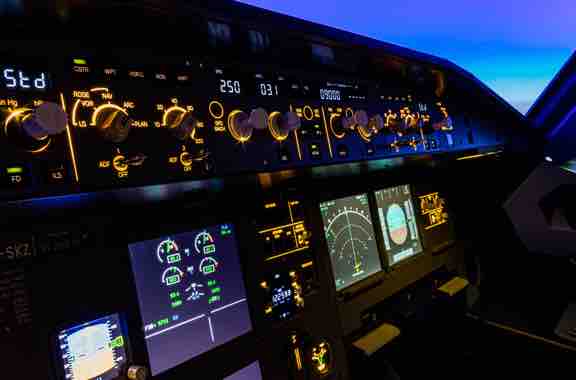 Do you think the U.S. residential real estate market is hot right now? There’s one that’s even hotter, and you can’t even see it. You need billions of dollars to buy a tiny piece of it––assuming you’re allowed to bid on it. And it’s key to understanding the recent 5G-and-airline-safety stories all over the news.

This U.S. frequency spectrum is divided up into metaphorical parcels of land and allocated to serve the needs of both government agencies and civilian organizations. The abundant pink blocks are allocated to mobile radio traffic, including cell phone use. Some of the more-prominent turquoise blocks are set aside for television and radio broadcasting, as well as various types of navigation and satellite communications.

The market for radio frequency spectrum is already crowded. When new communications technologies need radio spectrum, the government subdivides or repurposes existing blocks of spectrum, and then auctions off the newly available space to companies for use. 5G has been allocated this way over the past several years.

Today, cellular providers deliver 5G services across a combination of these low-, mid-, and high-RF ranges. Each of those providers won a U.S. Government auction for the right to “own” slices of spectrum in each range to send their signals over.

To allocate mid-band spectrum for 5G use, the U.S. Government had to subdivide existing parcels of radio-frequency real estate. Figure 2 zooms in on this portion (left side of the second to the last row of colored bars in Figure 1 above). Where do you think they carved out spectrum?

The 3.7 GHz to 4.2 GHz range in the middle of the illustration was originally reserved for satellites to send signals to earth to “FIXED” ground stations (big immovable satellite dishes at specific locations) and for use by other “FIXED” radio towers that send signals to one another.

The Federal Communications Commission (FCC) carved out the 3.7 GHz to 3.99 GHz portion and auctioned them off to AT&T, T-Mobile, and Verizon for mid-band 5G use. The remaining 4.0 GHz to 4.2 GHz range stayed allocated to satellite signal transmission and fixed station use.

Which brings us to the “AERONAUTICAL RADIONAVIGATION” spectrum…

Immediately above the 4.0 GHz to 4.2 GHz satellite band is the 4.2 GHz to 4.4 GHz spectrum reserved for aircraft navigation communications. Aircraft altimeters use this frequency range to bounce signals off the ground during the final stage of landing to measure accurate altitude. When visibility is restricted due to weather or other issues, altimeter accuracy is critical for safe landings.

The “problem” with 5G and aircraft

The new mid-band 5G range is 200 MHz below the radio navigation spectrum. But it seems a lot of aircraft altimeters were designed assuming weak satellite signals across the 3.7 GHz to 4.2 GHz band and FIXED radio signals that are not allowed to cross flight paths near airports. The stronger mid-band 5G signals don’t travel on fixed paths and blanket areas, like flight paths around airports. Tests show that mid-band 5G can confuse existing altimeters or make them fail.

The risk exists with older altimeters. New altimeters are being designed to reject mid-band 5G interference. Some airlines with outdated altimeters are restricting pilots from using them during landing, or rerouting flights from U.S. airports suffering poor weather conditions. In response, some cellular providers have reduced mid-band 5G signal strength near airports, re-oriented antennas, or even delayed mid-band 5G deployments near some airports.

This is a known issue with a known fix

Mid-band 5G signals can confuse older altimeters. The “simple” solutions are to identify and replace existing affected altimeter equipment installed in commercial aircraft and re-orient and shape mid-band 5G signals near airports. Read more here. It all comes down to time and money for upgrades of aircraft equipment and 5G cellular deployments. There is no surprise here. This has been known to be necessary for years.

In the meantime, you’ll still get 5G around U.S. airports, just with reduced or absent mid-band.

What F1 cars can teach us about 5G and top speed