What F1 cars can teach us about 5G and top speed 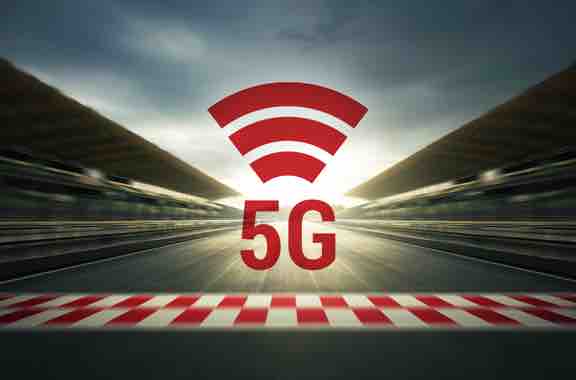 Hearing everyone talk about the increased bandwidth and download speeds afforded by 5G is a lot like saying a car is fast because it has four wheels, an engine, and can drive in a straight line. In short, there’s a lot more that makes cars, well…cars.

The consumer handheld market is certainly pushing speed as a means to encourage new experiences that require faster downloads and streaming, and lower latency, such as gaming. The speed will no doubt be something you can feel when using a 5G link, if it is available to you  and you have a compatible device.

Think of it this way: If 3G is a Volkswagen Beetle, 4G is a Porsche. 5G is the Millennium Falcon. The “person to the network” connection will feel, to paraphrase a colleague, like taking the Millennium Falcon for a trip around the Monza Circuit, Italy’s most famous racetrack dubbed,"Temple of Speed.”

However, that speed is not built on new phones or radios alone.

For those of you who’ve been lucky enough to see a Formula 1 (F1) car at full speed, you’ll appreciate what they bring. If you’ve been even luckier to see one go around the Parabolica at Monza, you'll know that watching a car turn into a blur at 330 km/h will give you goosebumps and a broadened appreciation. (The F1 Australian Grand Prix was recently canceled for the second straight year due to the pandemic––sad news for this Aussie F1 fan).

How a hunk of engineering moves like that is hard to comprehend so we focus on the simplest, tangible, and absolute measure: speed. And thinking about speed in a straight line is natural and the basis for acceleration (0-100 in x seconds). Similarly, the 100-meter sprint, which gives us a measure of top human speed, has no turns.

That same logic is typically applied to the advertising of 5G: “It can get you speeds of up to 10 gigabits per second.” Like the car in a straight line, this is essentially under best conditions. However, 5G’s true speed will come down to how all the variables that affect it function in combination and continuously. An F1 race car is the result of a combination of technologies such as aerodynamics, combustion engines, electrical engines, suspension, sensors, and other high-tech innovations that ultimately allows a driver to push the limits. 5G is similar. It is a revolution and most of the enabling advancements are, like F1, hidden from us consumers.

To further illustrate the comparison, consider the shift from current 4G mobile and telephony infrastructure to that of the 5G future. There are three main buckets:

Let’s explore each of the buckets and add in safety.

5G architecture includes a shift away from proprietary hardware and software solutions that cause lock-in and reduced interoperability. 5G´s speed, low-latency, interconnectivity and openness have challenged traditional cellular models, and have asked manufacturers to consider open standards such as Open RAN. RAN (Radio Access Network) is the underlying design and technology that allows users to connect to mobile providers. From Radio signal, through to accounting and access control.

Using industry standards (e.g., 3GPP) Open RAN outlines a baseline that providers and manufacturers can use to build interoperable components and drive more innovation and more options. It allows for modularity and competition in various spaces from signal towers through to packet switching technologies.

This openness helps keep the price of entry down and allows providers to build and evolve 5G-based capabilities. The F1 equivalent is how all racing teams must have certain tires, safety controls, and electronic control units. But on top of that, each team customizes and fine-tunes their own car.

Over the last 10 years, IT has continued to move compute workloads from data centers to the cloud because of ease of management, delivery, support, and, most of all, consumption. The transition is ultimately better for enterprises and the planet.

What has become somewhat overlooked though is that as workloads have moved to the cloud, they can get “further away” from the users consuming them. This doesn't always yield the best performance due to latency that can increase response times. Whilst not immediately noticeable, having compute distanced from the user - a very 4G mindset, is evolving:

5G addresses slow response time with edge computing by bringing raw compute services closer to the end user. This decreases latency times, but also allows us to rethink how application workloads will be consumed.

Edge computing keeps the compute required for the workload local to the user (or device) that needs the service thereby minimizing the network hops to and from the workload, thus reducing latency. This plays out very importantly in use cases like augmented reality where very low latency is required to make the service consumable.

Returning to our F1 analogy, less steps means more speed. Power units in the race cars must maximize their thrust by reducing the number of moving parts so that as much of the energy from the combustion of fuel (and now the battery pack) can be transferred to the wheels (the “edge”).

In F1, it is crucial to maximize the contact between the tires and the road. If the tires lose any grip because of deflation, debris on the road, or a wet track, the car can’t optimally accelerate, change direction, or stop safely. The performance gains of improved power units, interconnected and standardized parts, and so on are completely negated. F1 teams have spent many years trying to minimize the impact of a loss of grip and in the process created incredible technological designs from sliding aerodynamics to cars with six wheels. Some of these improvements have helped, but grip is still easy to lose and can cost a team a podium finish or much worse.

Grip in the wireless world can be thought of as the connection between a device to the mobile network. Ubiquitous coverage for all mobile clients is itself a miracle of engineering, when it is available and when it works.

5G is a massive step forward in connectivity. Consider the number of connected devices per square kilometer it can support: in the 4G world that number is 4,000 devices, but in 5G it balloons to one million. The result is the most constant connection and far more connections, creating a mesh of people, devices, apps and services unlike the world has ever seen. While everyone will be connected, they will not always be on the same “road.”

Network slicing, which essentially creates a dedicated lane on the 5G race track for each “car” allows network administrators to apply a quality of service for different connections. So not only are you getting more cars, but everyone is working in their own space.

In 2022, F1 is moving to a new set of rules and regulations that will boost driver safety while making the sport more entertaining for viewers. Teams will engineer smarter ways to protect their “pilots” as their cars get faster. Innovations developed by one team are seen and copied by others with openness and protection in mind, like the introduction of fireproof overalls for drivers in the 70s.

5G is also bringing changes to underlying security controls. These include mutual authentication of devices and carriers, so that your devices are connected to the right 5G network. However, the network traffic from your device to the Internet or other networks will remain “as is.” The device and its services will still need to protect traffic. When a provider locks the device to the right 5G signal and you browse the web using TLS to encrypt traffic, you get a base level of layered protection. This may be enough for B2C, it won't cut it for enterprise security.

If you're running a legacy hardware-based security architecture, 5G may cripple it. Consider how difficult it is for an enterprise to do full SSL inspection today using hardware security appliances. With 100 times the incoming traffic, would you be able to find every hidden landmine? 5G data volume will make hardware-appliance-based SSL inspection all the more untenable.

5G will transform how enterprise users access the internet. Enterprise IT leaders who try to force 5G traffic through antiquated, perimeter-secured network architectures will inconvenience and alienate users, tempting employees to bypass corporate security models for the sake of faster internet. While there’s still time, progressive IT leaders should also view 5G as an opportunity to embrace a new, scalable security model: one with inline security and local internet breakouts so that employees can be productive with secure, fast access to internet and cloud resources. And while on breaks, they can enjoy watching live F1 on their 5G smartphones.

5G and the Power of the Edge

Nathan Howe VP, Emerging Technology & 5G
Why your SOC won’t save you Tony Fergusson Zscaler
Change for good: How to successfully lead your organization through turbulence with Dr. Joseph Drasin Sean Cordero Zscaler
Four ways AI/ML can make a real difference for your cybersecurity Sanjit Ganguli Zscaler
Zero trust, as explained by a pirate (with help from ChatGPT) Greg Simpson Synchrony
Future-proof IT